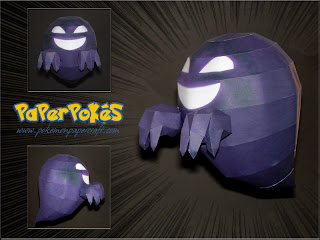 Name: The Ghost of Cubone's Mother[via pokemonpapercraft]
Type: Normal
Species: Literal Ghost Pokémon
Interesting Facts: In Lavender Town, Team Rocket attempted to steal the skulls of all Cubone, in order to sell them for large amounts of money. One Cubone, however, was protected by its mother. The Cubone escaped, but its mother was killed. As a result, the Marowak's ghost remained in the Lavender Town Pokémon Tower, forbidding access to the topmost floor. She appears in disguise and is able to avoid all PokéBalls that are thrown at her. She is so scary, that opponent's Pokémon are too frightened to attack. However, her true form can be reveled with the use of a Silph Scope and subsequently battled. Once she has been defeated, her soul may find its peace and she can finally depart to the afterlife.

THE PAPER MODEL
Height: 16.0 cm/6.3 in
Width: 14.2 cm/ 5.6 in
Depth: 14.4 cm/6.7 in
Pages: 4
Pieces: 22
Level: Easy
Designer: POdragon
Photo: Skelekitty
NOTES: This is a really easy and fun model. Before gluing the first piece at the top of the head together, don't forget insert a long strand of micro-filament for it to hang with. To close, pop the tip of tail on with a generous amount of glue. After you have finished the body and the hands separately, use some superglue along the vertical back edge of the hands (where the wrist would be) and attach to the body. Hang from your ceiling and go "Wooooooooo!" *wiggle fingers*