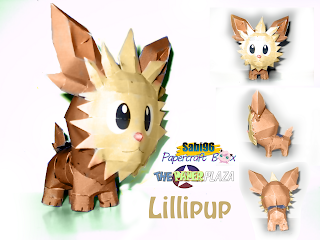 Lillipup is a tan-colored, dog-like Pokémon. It has large eyes and a red nose, with its face covered by an abundance of cream fur. Its large ears have spiky lower extensions. Its fur puffs about above its paws, and its back has a spiky black stripe. Its tail is spiky and shaped similarly to Lillipup's ears. It evolves into Herdier starting at level 16, which evolves into Stoutland starting at level 32.

Instructions: Start from the nose, then the face, then the ears. Add the back of the head. Glue on the body, and later the feet one by one. Finish with the tail and the back fur.